A cat paralysed in both front legs after being hit by a car is learning to walk again by taking swimming lessons. Mog the grey tabby sustained horrific injuries and spent six weeks on a drip after a car smashed into him in a hit-and-run incident in February. 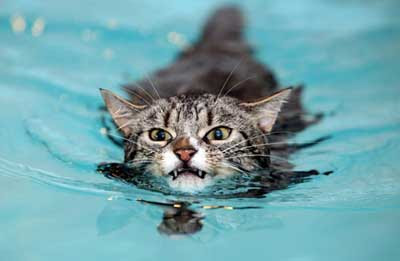 Incredibly, the one-year-old did not break any bones in the smash – but suffered nerve damage which left his two front legs completely paralysed. His owner, Veronica Ashworth, 62, was told her pet would never walk again and watched as he slowly learned to move by pushing himself along with his back legs.

Mog could also only sit up on his hind legs – like a Meerkat – as he could not put any weight on his damaged front legs. A local vet suggested that hydrotherapy classes – usually for water-loving dogs – could help relieve his pain and Mrs Ashworth decided to take him for a session.

Mog initially ”looked horrified” when he clapped eyes on the canine hydrotherapy pool – but took to it like a duck to water and began swimming lengths. The determined cat has now been attending the £30 sessions for ten weeks and has made has made a ”vast improvement”, according to Mrs Ashworth.
Posted by arbroath at 6:05 am
Email ThisBlogThis!Share to TwitterShare to Facebook

Said cat is probably powered solely by hate at this point. Once it can walk, the vengeance it will seek for such indignities will be unbounded.