At Crowes Nest Farm in Manor, Texas, there's an interesting dynamic playing out with some baby ostriches. David Williams started taking in the large birds back in the 1980s when farmers didn't want them anymore. 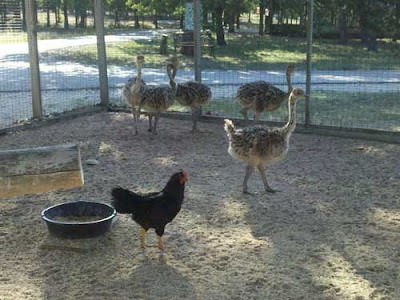 "It was a failed agriculture experiment of trying to market ostrich meat and ostrich products," said Williams. But when these birds started having babies they never made it very long. "We always had bad luck, either the parents would step on them or the owls would get them at night or the coyotes would get them during the day and none of them ever survived," said Williams.

This time, Williams wanted to try something a little different. When the five ostrich babies were just a day old, he took them from their mother and put them in the aviary and assigned a new animal to be the mother.

"A little black hen, call her the surrogate mamma. She has taken them under her wing so to speak and she's the mamma, they go everywhere she goes," said Williams. They sleep together, eat together. It's quite the attachment. But very soon these cute little six week old ostriches may have to say good-bye to their new mother. "After three months they grow a foot a month up to eight feet," said Williams.
Posted by arbroath at 6:07 am
Email ThisBlogThis!Share to TwitterShare to Facebook