An owl was left in a flap after crashing into a window, leaving a near perfect print of himself on the glass. Sally Arnold returned home to Kendal, Cumbria, and found the huge imprint complete with eyes, beak and feathers on her bedroom window.

She said: "Our first concern was for the welfare of what we suspected was an owl and we opened up the window to check if it was still around. Fortunately, there was no sign of the bird and we can only assume that it had flown away probably suffering from a headache." 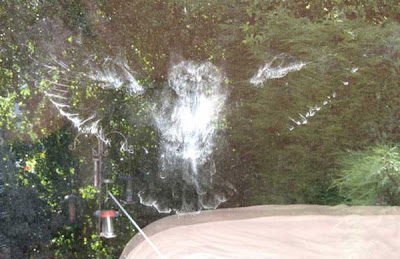 The silhouette was left by the bird's "powder down" - a substance protecting growing feathers. Experts from the Royal Society for the Protection of Birds (RSPB) confirmed the bird was most likely a tawny owl because of its size and shape and the fact that they appear in gardens more regularly than others.

Val Osborne, head of the RSPB's wildlife inquiries team, said: "We don't very often see an imprint of a bird that's flown into a window that's this clear and where it's pretty obvious exactly what kind of birds it is. This would have been very uncomfortable for the bird but thankfully it looks like it survived as Mr and Mrs Arnold couldn't find it anywhere close by. Sadly, many birds aren't so lucky."
Posted by arbroath at 6:02 am
Email ThisBlogThis!Share to TwitterShare to Facebook