An angler battled to reel-in what he thought was an enormous fish pulling on his line only to discover it was a scuba diver he had caught by the leg. John Goldfinch, 61, was fishing for mackerel on the beach at Budleigh Salterton, Devon, with mates Colin and Alan Ashley when he felt a huge bite.

The thrilled lifelong angler had to fight to reel in the catch as he looked forward to netting a massive fish. But his excitement turned to shock when his hook surfaced about 15 metres offshore to reveal the hapless frogman. To add insult to injury the struggling diver had been hooked between his legs. 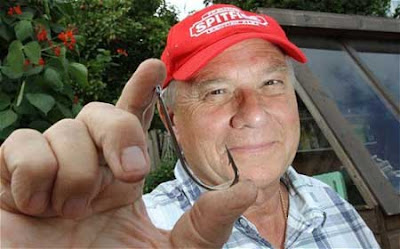 Mr Goldfinch, of Exmouth, said: "My mates were falling about laughing. I said 'sorry mate, I didn't see you there' and he just said it was very murky down there. The funniest thing was that his girlfriend then surfaced, helped him remove my tackle from his tackle and nonchalantly handed the hook back to me and apologised.

"Despite seeing the funny side of the freak incident he said there was a serious message to be taken on board. I didn't see the diver because he didn~t have a safety buoy, which they~re supposed to have when they~re moving underwater," said Mr Goldfinch. "My brother-in-law's a diver and he said it served the bloke right - at the end of the day he could have ruined his kit or even worse."
Posted by arbroath at 6:00 am
Email ThisBlogThis!Share to TwitterShare to Facebook