'Five-year-old' in need of paramedic help was a cat

Paramedics were sent to a family home after a 999 call about five-year-old "in cardiac arrest" - only to discover the patient was a cat. The East of England Emergency Ambulance Service received a 999 call last week from a desperate couple who pleaded with them to ''revive their five year-old''. A fast response car and ambulance were scrambled to the scene with paramedics fearing that a young child was close to death.

But when the teams arrived at an address on Crane Mead, Ware, Herts, they found a tearful couple clutching a five year-old cat - which later died. One paramedic, who asked not to be named, has told how emergency crews were ''gobsmacked'' when they discovered the truth. He said: ''Quite a few were mobilised. Everyone was stood down once they realised. It was a completely surreal situation. 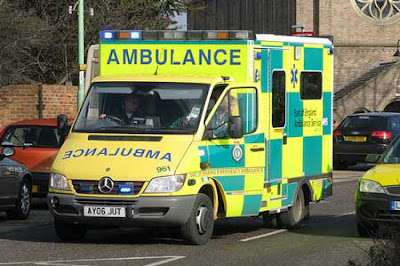 ''I've gone to some silly calls but nothing like this. I can't understand why they didn't try to call a vet. Some people think 999 covers everything. As a paramedic, the 999 situation that raises the adrenaline the most is probably being called to a seriously ill child - it's human nature. Fast response cars and ambulances will be driven at the maximum for safety speed to the scene and paramedics will be mentally prepared to offer their immediate professional assistance.

''You'd certainly be pumped up by it. I think the paramedics were probably relieved it wasn't a child to start with and then they were absolutely gobsmacked.'' The bizarre 999 call was received by the emergency services at 6.45 am on Wednesday, August 10. The paramedic added that the couple had only been in the country a short time and may have been confused.
Posted by arbroath at 6:01 am
Email ThisBlogThis!Share to TwitterShare to Facebook