A golf enthusiast from Germany embarked on an 800-mile round-trip to find a Portishead man to whom he owes a pint after losing a bet five years ago. Sebastian Steinzen spent a week in North Somerset trying to track down a Portishead couple he knows only by the names of Patrick and Pam. In September 2005, Sebastian met the couple while on a golfing holiday in Majorca with his girlfriend Nina. During their 10-day stay, the two couples played three rounds of golf together. During the final match, Sebastian bet Patrick he could land his ball no more than 2m away from the flag from a distance of about 130 yards.

Sebastian, aged 34, said: “I am normally good at that distance but unfortunately I missed the green.” Sebastian and Patrick on the golf course in MajorcaThis was the day before Patrick and Pam flew home and Sebastian never had the chance to buy Patrick the pint he owed him. Now, after five years, Sebastian has spent £1,000 travelling to England to find Patrick and buy him that pint. The history and politics teacher said: “I owe him a pint - I want to pay my bet. That is the only reason I am here. I have travelled 800 miles to try to find Patrick. It is worth every penny if I find him.” 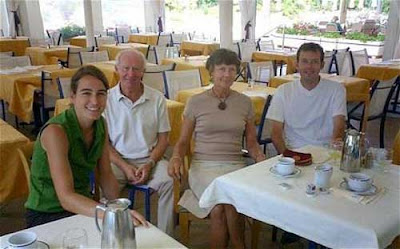 Two months after returning from the holiday, during which the two men had discussed English history, Sebastian received a copy of a book called The Collapse of British Power, sent by Patrick. However, during a house move from Munster to Gladbeck, Sebastian then lost Patrick’s address. So, he travelled to England simply knowing that Patrick lived in Portishead and regularly drank at The Black Horse pub in Clapton-in-Gordano.

During his week in North Somerset, Sebastian spent every evening at the watering hole and spent his days travelling to golf courses in the area in the hope someone would recognise his photograph of Patrick and Pam. However, his search proved unsuccessful and Sebastian had to return home on Wednesday. Sebastian added: “I just thought the people at the golf courses or the pub would know him. I hope that everything is alright and he is healthy.”
Posted by arbroath at 6:01 am
Email ThisBlogThis!Share to TwitterShare to Facebook