McDonald's has launched an investigation after a two-and-a-half-year-old child was found chewing a used condom in the playground of its Geraldton outlet in Australia. The girl's father was eating at the restaurant at 1pm on Saturday near the playground when he saw her emerge from a playhouse with the condom in her mouth.

"I was absolutely disgusted," her father said. "Other people grabbed their kids and just about jumped the fence." He scrubbed his daughter's mouth out with soap and washed her hands and said her health would be monitored. 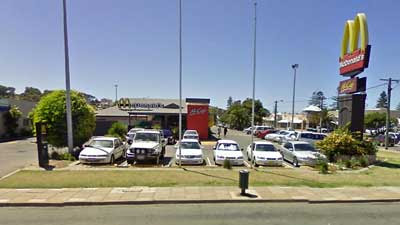 He showed the condom to a "junior manager", who said it was the second one found in the playground that day. He then asked if he could file an incident report.

A McDonald's spokeswoman said the company was treating the matter "very seriously". Cleanliness and safety were the company's top priorities, with the shift manager required to make half-hourly duty checks on all areas of the restaurant, including the dining room, rest rooms and playground, she said.

Update: A group of schoolgirls have now owned up to planting the condom - filled with vanilla ice cream.
Posted by arbroath at 6:02 am
Email ThisBlogThis!Share to TwitterShare to Facebook