Man accused of exposing himself through car sunroof

An off-duty Florida Highway Patrol trooper says he was on his way to a 9/11 ceremony with his wife and child when they were interrupted by 31-year-old Julio Socarras Mompeller, who was allegedly standing through the sunroof of a car and exposing his penis on the highway. According to Monroe County Sheriff's Deputy Becky Herrin, the trooper called the police while driving with his family on U.S. 1 in the Florida Keys around 9 a.m. 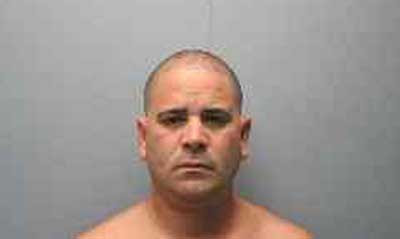 A pair of MCSO deputies pulled the Mercedez over, and noticed Mompeller in the passenger seat with no shirt, and his pants unbuckled, Herrin says. The trooper also pulled over with the deputies and identified Mompeller as the man who had been exposing his penis on the highway.

Mompeller denied to police that the car ran a red light, but the other two people in the car admitted that Mompeller definitely had his penis out while he stood through the sunroof of the car, according to police. The two people who admitted Mompeller was exposing himself told police they're not sure why he did it, Herrin says. Mompeller was booked into jail, and faces one count of indecent exposure.
Posted by arbroath at 6:02 am
Email ThisBlogThis!Share to TwitterShare to Facebook