An orangutan in Malaysia called Shirley - famous for smoking cigarettes thrown by visitors into her enclosure - is being helped to kick the habit. Wildlife officials say she is undergoing "cold turkey" at Malacca zoo after being removed from her zoo in southern Johor state last week. Shirley is expected to be sent to a wildlife centre on Borneo island once her rehabilitation is complete. Her withdrawal symptoms are not too bad, officials say. 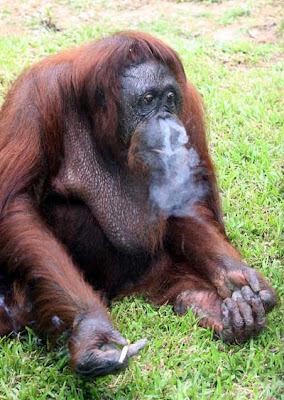 Malacca zoo chief Ahmad Azhar Mohammed said she was so far displaying a regular appetite for food and no obvious signs of depression and illness. "I would say she is not addicted... but she might have formed a habit after mimicking human beings who were smoking around her," he said. "Smoking is not normal behaviour for orangutans," he pointed out. Results from blood and other tests have not yet come back. The orangutan - thought to be aged around 20 - and four other animals were rescued from the zoo last week, having been kept in what the authorities said were deplorable conditions, she adds.

Nature Alert, a British-based activist group, had raised its concerns with Malaysian officials more than a year ago after conservationists shot footage of Shirley being thrown lit cigarettes. They claimed on their website at the time that she "appears to suffer severe mood swings, sometimes looking drowsy - as if drugged, other times without a cigarette she was very agitated, looking as if she could be suffering withdrawal symptoms". Sean Whyte, CEO of Nature Alert, on Monday described the removal of Shirley - and a second orangutan Abu - from Johor zoo as "wonderful news".

He said the zoo had been badly managed and was out of touch with modern methods of looking after animals - giving Shirley black plastic bags to play with, and keeping Abu shut up in a dark "concrete cell". "Shirley's life has for so long been hellish," Mr Whyte said. "At least she and her mate Abu are now on their way to a new and greatly improved life in Sarawak." But Johor zoo has been defended by Malaysian wildlife chiefs. Deputy director-general Zaaba Zainol Abidin of Malaysia's Department of Wildlife and National Parks said Shirley had picked up her smoking habit while a pet in Sarawak, and the zoo had tried its best to stop visitors throwing cigarettes to her.
Posted by arbroath at 6:03 am
Email ThisBlogThis!Share to TwitterShare to Facebook