A teenage girl faces jail for stealing two left-footed training shoes during the summer's disorder. Danielle Corns, 18, was caught grinning on CCTV during the unrest in Wolverhampton city centre in August. The sixth-form student was arrested at her home in Willenhall, West Midlands, several days after the riots in the city on August 9.

It is believed that Corns, who has applied to join the RAF, had gone to police to explain that her picture had appeared in photographs showing looters rampaging through Birmingham. She was arrested during midnight raids after police published the photographs of riot suspects on the internet and in local newspapers. 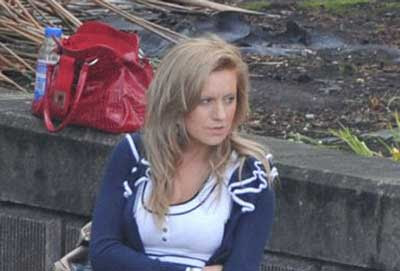 Corns is understood to only have accepted that she took two left-footed training shoes during the unrest. She admitted entering the shop with others as a trespasser and stealing two training shoes at Wolverhampton Crown Court.

Speaking to Corns, Judge John Warner said: 'I am sure that you know from the sort of sentences that have been handed out, the way these cases are being treated. So you must prepare yourself for a custodial sentence'. She will have to wear an an electronic tag and is banned from setting foot in Wolverhampton city centre and from leaving the West Midlands until she is sentenced.
Posted by arbroath at 6:00 am
Email ThisBlogThis!Share to TwitterShare to Facebook

Is she supposed to get a break for being incompetent at looting and rioting?