Bid launched to change Uffington White Horse into a unicorn

A historical campaign group has launched a £50,000 bid to have the world famous Uffington White Horse made into a unicorn. The plan by the 'Save the Unicorn at Uffington' has almost 1,000 members and is being lead by Bronze Age enthusiasts. They claim the 3,000-year-old horse made from crushed white chalk in Uffington, Oxfordshire, was originally meant to be a depiction of the mythical horned beast. The amateur historians have now received financial backing from 'well-wishers' including a £50,000 anonymous donation towards adding a 75-foot long horn to the horse. 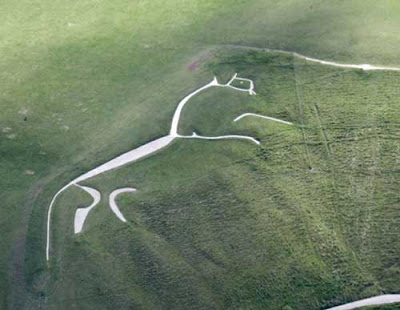 The Uffington White Horse - which measures 374 feet - or 110 metres - is owned and managed by The National Trust - who have now received a proposal about the horn from the campaigners. Leading the group is children's author Paula Broderick who claims to have uncovered the truth behind the giant carvings identity. Paula, best-known for her children's fantasy series, the Toby and Sox trilogy, lives in Somerset - almost 100 miles from the monument. She said: "The Uffington White Horse has been a great British landmark for centuries, however its true form has always been shrouded in mystery.

"You only have to look at its head to see that it is not, strictly, a horse. We believe that the Uffington carving is actually one of a unicorn, a mythical creature known to have fascinated our ancient cultures and folklore." Situated on the upper slopes of White Horse Hill, in the parish of Uffington, the 374ft-long carving - formed from deep trenches filled with crushed white chalk - has been shown to date back to between 1,400 and 600BC. But its strange design, which varies significantly from other white horses in Britain, has sparked fierce debate among experts - including The National Trust - about whether it was intended to represent a horse or some other animal.

It has been referred to as a 'horse' since the 11th-Century, primarily because ancient scripts from nearby Abingdon Abbey refer to 'mons albi equi' at Uffington - or the White Horse Hill. According to Paula the figure is "most likely" a unicorn - a mythical beast resembling a white horse with a large horn projecting from its forehead. Its original horn, she argues, would have been removed by over-zealous Christian scholars in the 13th or 14th centuries. This isn't the first time that the Uffington Horse has been at the centre of an identity battle. In 2010, retired vet Olaf Swarbrick claimed that anatomically-speaking, the ancient carving was more akin to a dog.
Posted by arbroath at 6:01 am
Email ThisBlogThis!Share to TwitterShare to Facebook

I think as it stands, it captures the essence of horse-y-ness.

They should leave it well alone. To me it doesn't matter what they think the original builders of it may have thought. It is what it is and to alter an ancient monument sets a dangerous precedent.

Why would the Christians remove the horn? There are unicorns throughout the bible.

SteveC : Whilst I agree, to get the sheer grandeur of it, I would still be curious to see part of the acropolis rebuilt, though perhaps in a different colour/material so you can see what's original and what's contemporary.

It's a marvelous piece of art that has survived 3,000 years. It's part of the National Trust, and should remain as it is. If a group of people want a unicorn, let them make their own. Bet it wouldn't last as long.

On their 'save the unicorn' facebook page, they state something about this being a representation of the last unicorn that was killed after a actual battle that included men, unicorns and dragons.
Luckily the story of the battle can be read in a book that the author of the page wrote herself.
Either she's mad in the head, or is simply wanting to advertise her book. Or both.

If they don't think it was originally a horse wouldn't a stag be more likely historically?

The horse is made up of ditches full of crushed chalk. Is there any physical evidence on the ground that there has ever been a horn? If not has there ever been any archaeological work done that identified the presence of a filled in trench in that location?

If not and the assumption is based purely on the idea that unicorns were sacred/important to ancient people it could equally be a sight hound or hare.

What ever it was, it need to be left as it is. Using the logic that it started out differently and should therefore be put back to the way it 'was' just doesn't make sense.

I doubt anyone would use a similar thought process to argue knocking down all the castles on the East coast and replacing them with wooden ones.