Croissant thief on the loose in France

French police are on the hunt for a man in his forties who has held up a series of bakeries in Paris suburbs to steal croissants and other baked goods.

Since December 9, the man has robbed five bakeries in the western suburbs of the French capital, police said, each time using the same modus operandi. 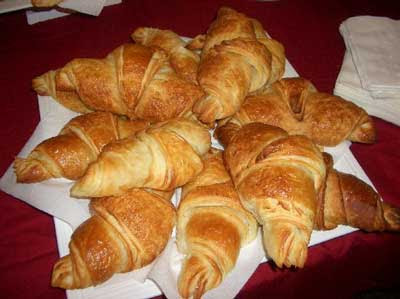 After placing an order, the man holds up what appears to be a fake revolver, points it at the person behind the cash register and takes his pastries without paying.

No one has been injured in the robberies and in each case the value of the goods stolen has been low, at between eight and 20 euros (£7 and £17).
Posted by arbroath at 6:04 am
Email ThisBlogThis!Share to TwitterShare to Facebook