Brothel opens its doors to the homeless

Homeless people are queueing up for free rooms in an Austrian brothel after owner Peter Laskaris said it would be unfair not to do everything he could during the current cold spell. Laskaris, owner of the Red Rooms Laufhaus in the Austrian capital Vienna, has opened his door to the homeless as temperatures of minus 20 hit the city.

He is offering 10 people a night a bed in his brothel for free, including a hot shower and a hot meal. But he added: "Other services are not included." He added: "We are not really doing much business in the current cold weather anyway and it is the school holidays - a lot of people are off away with their families. Lots of our rooms are empty and it seemed a shame not to use them for a good cause. 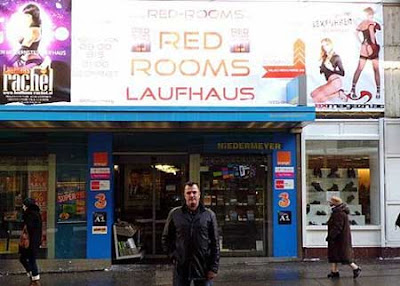 "In these cold temperatures nobody should be left out on the streets." He said that every room has a bed and a private shower and each guest will get clean bedding each day and fresh towels. He said: "I have told staff to make sure that the ten rooms are reserved for homeless people. I don't want anyone out in the cold." And he added that it had been so popular that he was now in talks with other brothels in Vienna to open their doors to the homeless.

He said: "The homeless shelters are completely full. People need a warm place to stay. Giving away 10 rooms means that we only have five rooms remaining in our brothel and these are running as normal. None of my girls are complaining – they have a lot of sympathy for the homeless. We have security staff here anyway but it's been no problem – everyone has taken up the offer has been very grateful to have a warm roof over their heads."
Posted by arbroath at 6:04 am
Email ThisBlogThis!Share to TwitterShare to Facebook