After eggs with rubber-like yolks began sparking wide concern around China, Shanghai consumers are complaining that they also have found such eggs locally, but authorities haven't taken action. A consumer surnamed Cai living in Minhang District said the eggs he bought from a big hypermarket were strange. After boiling, the yolk was barely edible, as it wouldn't break under his teeth, and it could bounce like a ping-pong ball, he said.

"I'm afraid that I came across the 'artificial eggs'," he said. He called the hypermarket, who told him that their eggs come from suppliers with business licenses. "I don't know what I can do," Cai said. "Should I break every egg to see whether they're real eggs when buying?" 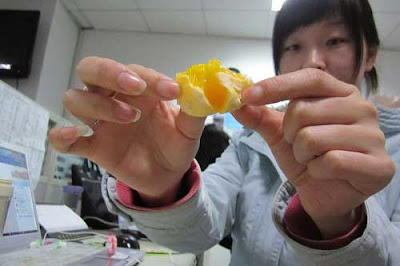 Experts with the Shanghai Food Research Institute said the egg sample Cai provided was "suspicious." "It doesn't look like real egg, but we still can't confirm what it is," said Ma Zhiying, an institute researcher. Ma said most so-called artificial eggs turn out to be unqualified real eggs. "Two situations may cause yolks to feel like rubber," he said. "One is that the egg is stocked in temperatures under 10 degrees below zero Celsius for more than 30 hours.

"And the other is that the feed for chicken contains a great amount of gossypol." He said that gossypol, a toxic compound found in cotton plants, is harmful to male reproductive systems. The Shanghai Industrial and Commercial Administrative Bureau said before confirming that the eggs are fake, they will not take any action but instead will closely monitor the affair.
Posted by arbroath at 6:05 am
Email ThisBlogThis!Share to TwitterShare to Facebook