A mob burned alive a 40-year-old woman on Friday after accusing her of casting black magic spells in a remote village in southern Nepal, police said. Dengani Mahato died after she was severely beaten, doused in kerosene and set alight for allegedly practising witchcraft, Gopal Bhandari, a superintendent of police in Chitwan district, said.

"Nine people started to beat her after a local shaman pointed the finger at her over the death of a boy a year ago," the officer said. "They accused her of having hands in the death of the boy, who had drowned in a river." Bhandari said the shaman and the nine locals suspected of taking part in the crime had been arrested on suspicion of murder. 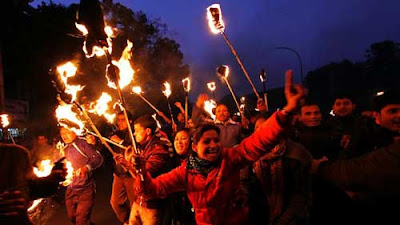 "They poured kerosene and threw straw over her and then set fire to her. No one came to her rescue. By the time we heard about it, she had already died," he said. The atmosphere was tense in Madi village following the murder, he added, with Mahato's neighbours refusing to allow police to take her body away for a post-mortem examination.

The village, inhabited by ethnic Tharus and other indigenous tribespeople, is a 90-minute drive from the nearest town of Bharatpur. Hundreds of lower-caste women are thought to suffer abuse at the hands of "witch hunters" every year in Nepal, where superstition and caste-based discrimination remain rife and where most communities still operate on strict patriarchal lines. Human rights campaigners say the perpetrators of such crimes are rarely brought to justice.
Posted by arbroath at 6:06 am
Email ThisBlogThis!Share to TwitterShare to Facebook