Poland's only officially registered ghost hunter has accused the spirit world of giving up on mankind - and he wants a census to check his theory that there are fewer spirits bothering to stay and haunt people. Piotr Shalkevitz, 40, from Chrzanow, Poland, who has spent tens of thousands of pounds on the best paranormal detection equipment, believes it might be because they have given up trying to warn people to prepare for the afterlife. He said: "Maybe they think we aren't worth saving, and they have given up trying to tell us whatever it was they wanted us to know.

"It might also be that people just aren't bothered, they see so much on the TV and they just rationalise it all away. They have become immune to messages from beyond." Now frustrated Piotr, who became Poland’s only officially registered full-time ghost buster three years ago, has issued a plea to his fellow countrymen for a census of ghosts to monitor the population. But he also wants global ghost busters to contact him about their local spooks. He said: "We need to have a record of where the ghosts are haunting, and only then can we really monitor if numbers are falling. If there is no record in the first place we have nowhere to start. If someone suspects paranormal activity, I have a 24-hour hotline. Call me and I’ll be there." 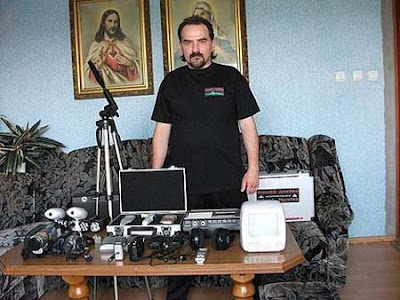 Piotr first become interested in the supernatural after a spirit saved his life thirty five years ago. He had been electrocuted and suffered a heart attack - which meant he blacked out. He said: "I could sense shadowy figures around me but then there was one figure that drove the rest away as it approached me - its energy was so strong that I felt it restarting my heart and I came round. Since then I have been sensitive to the spirit world and there is a marked reduction in the amount of spirit activity." He continued: "I’ve spent a fortune on special equipment from the US to hunt down ghosts, but there are only about 50 places in Poland which still seem to actually have any. There are places that suffered during the war which still seem to have ghosts.

"In England, Ireland and America there has always been a rich tradition of haunted houses and the like, maybe its better there still. I'd be interested to hear from local ghost hunters about their experiences." He added he was hampered in his research by locals. He said: "Very few people here take ghosts seriously, so even if they do have a paranormal experience they tend to ignore it and are reluctant to contact me." He added: "My house is haunted, so I know ghosts exist. It just needs a change in the mindset of the people here for them to realise they too could be sharing their home with a ghost."
Posted by arbroath at 6:05 am
Email ThisBlogThis!Share to TwitterShare to Facebook

Maybe they move away because they're being hunted by a nutter. Perhaps he should check one country over.