An outing to a nature spot near Kristianstad in southern Sweden turned into a nightmare for the Högberg family after 3-year-old son Leo fell into a crack in the rock, remaining stuck for five hours before an Irish climber could finally pull him free. The Högbergs were out walking in the popular hiking area of Kjugekull when Leo suddenly dropped three metres into a tight crevice in the rock, according to media reports. As night began to close in Leo’s parents, Henrik and Linn Högberg, together with a team of rescuers from the emergency services, battled to free him.

The crack into which Leo fell was only just wide enough to allow a toddler to pass through and thus too small for an adult to descend. Several attempts to persuade the three-year-old to grab onto a rope in order to help the rescue team pull him free were unsuccessful. On one occasion the boy held the rope but when his head became stuck in the crevice he panicked and let go. At one stage a young local girl offered to crawl into the cliff into order to help Leo out of his ordeal, but the space proved too small to accommodate her.

As the hours passed by, and with temperatures dropping and nightfall approaching, help eventually arrived in the form of a Malmö climber, David Crawley, who was able to dangle upside down, reach Leo’s hand and pull him free. Crawley, originally from Ireland but currently resident in Malmö, happened to be in the area when he noticed the commotion and offered to help. “I am pretty slim and could get down headfirst while the emergency services staff held my ankles,” Crawley said. 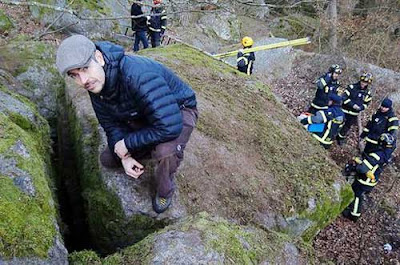 The experienced climber was able to use a hook to pull the boy by his clothing so that he could grab hold of his hand and bring a happy end to a nightmare day for the Högberg family. “We are so terribly grateful for the fantastic input of the emergency services and the climber who helped us,” Henrik Högberg said, after his son had been placed into his arms shortly before 4pm, ending a five and half hour ordeal.

There's a news video on this page.
Posted by arbroath at 6:04 am
Email ThisBlogThis!Share to TwitterShare to Facebook

This is why you don't take children out. You leave them in a cage in the living room watching the television.