A 41-year-old man was arrested on Tuesday evening on suspicion of having thrown bloodied pig heads onto chocolate displays at a famous confectioner’s in Luzern.

Shortly before midday on Tuesday, the man entered the Bachmann store at Luzern station and, having looked surreptitiously about him, threw several pig heads right into the praline section. Having taken the heads from a plastic bag, he then left a trail of blood behind him as he exited the shop. 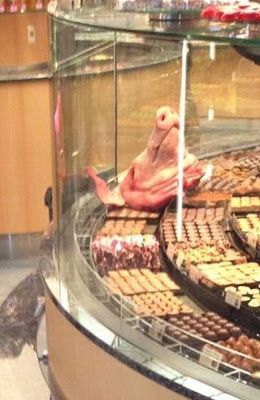 “Not again!” a shop assistant, Almedina K., exclaimed. The man had carried out similar attacks on the business twice before. Two hours later he appeared again at another Bachmann store in Alpenstrasse, where he offloaded more of his revolting cargo.

Bachmann’s managing director, Mattias Bachmann, has apologised to customers and assured them that all the shops have been entirely cleaned and all of the chocolates removed. “The motive of this man is still unclear. We have not received any threats,” he said. Police arrested the suspect, a 41-year-old Swiss man, at his home in Kriens at around 6pm.
Posted by arbroath at 6:07 am
Email ThisBlogThis!Share to TwitterShare to Facebook