A bright spark has found a novel way to protest against their local council. A home-made pink lampshade has appeared on a streetlight on Weymouth seafront at Greenhill to make a point about the bulb being too bright. A notice has also been tied to the lighting column which says: ‘Do not remove the lampshade.’ The person behind the stunt, who did not wish to be named, said there was a serious point to make because the bulb from the streetlight was ‘aggressive’. Victorian lighting columns from the Esplanade have been relocated to Greenhill as part of the seafront regeneration scheme. 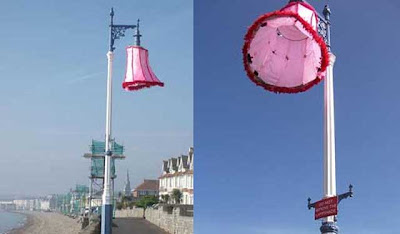 Weymouth and Portland Borough Council said the Victorian columns were being switched to an area of the promenade which was ‘poorly lit’. But Greenhill residents say the bulb from one of the columns which has been positioned between two homes on the seafront is too bright. Val Cole, whose lives opposite, said: “We used to have an uninterrupted view and now the light has spoiled that. On top of that the light comes directly into our room. It’s light pollution.” Mrs Cole, 59, added: “The lampshade is brilliant, it’s a great laugh.”

Angela and John Murphy said the Victorian lights were ‘beautiful’ but object to the brightness. Retired Mr Murphy, 53, said: “It’s like a car headlight. Even from a distance it lights up our garden. It’s like having a torch shone in your eyes.” Mrs Murphy, 51, added: “I love the lampshade, it’s fantastic. It even has little LED lights in it. It’s bringing people down this end of the seafront. It’s a talking point.” Boat builder Nick Hoare, 61, who lives opposite the light, said: “The problem is that it’s a horizontal light. I like looking out to sea at night but I can’t do that anymore because it’s blinding. 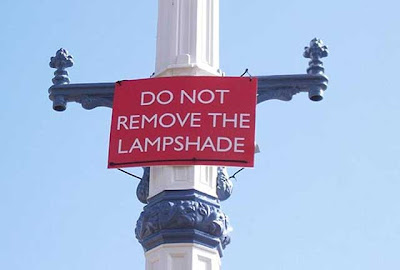 “The light is intrusive. It needs a baffle so the light shines downwards.” He added: “The lampshade hasn’t made much difference but it’s beautifully-made and a gesture of defiance.” The person who put up the lampshade, a resident, said: “Some friends helped me and we ensured we were very safe doing it. It’s just a way of saying ‘turn it down please’. It’s aggressive and blinding. Nobody has smiled at the light bulb but they’ve smiled at the lampshade. The seafront should be full of smiles.”
Posted by arbroath at 4:00 am
Email ThisBlogThis!Share to TwitterShare to Facebook