The pilot of a hot air balloon that crashed into electricity cables has described the dramatic incident “happened in a blur” as the balloon hit the power line with “a bang” causing a fire in the basket. Adam Griffiths was carrying two passengers in his balloon when it appeared to get blown into the cables in a field at Bozeat just after 6pm on Sunday. The rescue operation took five hours as emergency services waited for the electricity to be turned off, leaving Mr Griffiths and his passengers - one male and one female - trapped in the basket hanging from the cables. 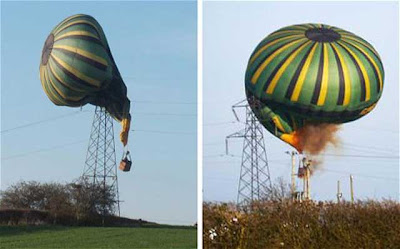 Speaking after he was freed, Mr Griffiths said: “It was coming in approaching to the landing site just down the road and it was all just a bit of a blur. We hit the power line which went with quite a bang and there was a little bit of a fire in the basket but it put itself out as I went to grab the fire extinguisher. The other two passengers knelt down in the basket so they were fine. We slid down the power line and came to a stand still.” There were no serious injuries and the party was relieved the drama was all over, he said. “It’s been a long evening. I’m massively relived to be on the ground and I’m okay and the two passenger are okay and that’s the main thing.

“The balloon is a bit of a mess but that’s not a problem. My dad was flying in another balloon two fields down and he saw what happened. My family are just relieved to see us back on the ground. Things do go through your mind when you’re stuck up there but the main thing is that we are all here and down from the balloon. It won’t put me off flying balloons. I have been in them since I was a little baby. I’m cold from sitting up there and got minor burns but I’m fine. It’s not definitive what happened and it’s a bit of a blur. Ill have to file a report and speak to the insurers tomorrow.”

One of the passengers, Colin Jiggle, aged 52, from Bedfordshire, said: “I know what it feels like to be a cat stuck in a tree now. We were having a very serene flight up until then. I have a pilot’s licence but I had never been in a balloon before. When we went into the lines and the pylon there was a lot of sparks. They burnt my jacket. It was like being in a firework. There wasn’t time to be frightened and the pilot dealt with it very well. We are just glad to be down on the ground again.” Fire service group manager Rob Porter said: “After the electricity had been earthed and isolated it took around 40 - 50 minutes to get all the passengers down. It’s a complicated practice to turn off the electricity so it took some time.”
Posted by arbroath at 4:01 am
Email ThisBlogThis!Share to TwitterShare to Facebook