After nine years and one police investigation Northampton retailer The Sofa King has been told by the advertising watchdog that it must ditch its catchphrase "Where the Prices are Sofa King Low!" because it sounds too much like the word "fuck". 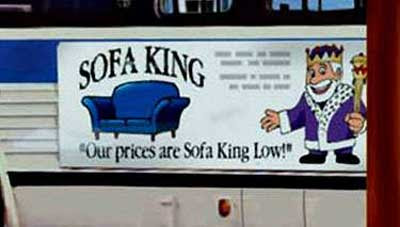 The Sofa King, which advertises its location in Northampton as "next to the cafe with the car on the roof", said it has been using the line on its shop, vehicles and advertising since it launched nine years ago. It is not the first time the company has been in hot water over its risqué advertising. The Sofa King admitted that the Northamptonshire police had received complaints in 2004 but that they had not been pursued by the Crown Prosecution Service.

The Advertising Standards Authority received three complaints from readers who saw an ad in the Northampton Herald & Post and found it offensive and unsuitable for general public display. In its defence The Sofa King said the slogan referred to pricing and that the words had "not been changed or run together or punctuation used in a way intended to cause offence".

However, the ASA said that the phrase could be interpreted as a derivative of the swear word "fuck", which research had found to be a word "so likely to offend that it should not be used in ads at all, even when it was relevant to the name of a product". The ASA said because of that the slogan was likely to cause serious or widespread offence and it banned the business from continuing to use the phrase "Sofa King Low" in its advertising.
Posted by arbroath at 6:02 am
Email ThisBlogThis!Share to TwitterShare to Facebook

We Americans whine about everything. It's just a word. What is offensive is Christina Aguilera wearing close to nothing on stage. What is offenisve is that politicians get to decide what I can do with my body.