A sneeze was so strong it caused a Victorian mother to dislocate two vertebrae in her neck. Monique Jeffrey may be Australia's unluckiest woman, but she still manages to muster a smile. "It was such a big shock when you have such a busy life," she said. "I have a 10-month-old baby, my husband and I work full time and it only takes something as small as a sneeze to turn it all upside down." The 28-year-old said the injury happened less than two weeks ago while she was in bed reading emails on her phone and she let out an "ah choo".

"I just knew something was wrong. I felt something move and I was in excruciating pain," Mrs Jeffrey said. Fortunately, she still had her phone in her hand. "Help can't move pls call," she messaged her husband Sam. She was taken to Sandringham Hospital where she was told she had a wry neck and given exercises to get it moving again. 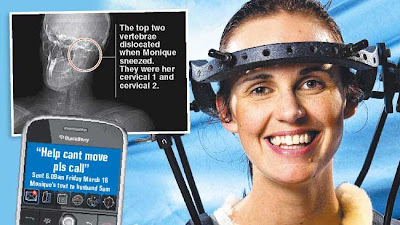 After several hours, her left arm developed numbness and tingling. She was told to stop moving immediately and was transferred to The Alfred hospital's spinal trauma unit where neurosurgeon Mr Patrick Chan revealed that her top two vertebrae had dislocated. He said the cervical 1 and cervical 2 literally jumped over each other. Her head was pressed down onto her right shoulder and locked in that position.

He said it was very rare for a sneeze to cause this injury, which was usually seen in trauma patients. "I think she's very unlucky and it was a violent sneeze," Mr Chan said. Fortunately the injury did not harm her spinal cord or cause neurological damage. Mrs Jeffrey was fitted with a halo traction and weights were used to gradually move the vertebrae back in place. Initially, she was devastated to learn that she would spend three months in a halo traction, leaving her unable to care for her son, Tom.

There's a news video here.
Posted by arbroath at 6:12 am
Email ThisBlogThis!Share to TwitterShare to Facebook

Why the hell is she smiling!?!

She's stuck that way. She is actually in extreme pain.