An Australian mother Kylie Steger's appetite for fast food has been ruined by a rude surprise at the bottom of a burger box. Mrs Steger of Toowoomba was irate after lifting up her Hungry Jack's hamburger to find a crude picture of a penis drawn on the inside of the box.

She said grabbing a takeaway dinner for her husband and two children from the outlet had been a regular habit. "Every week we get takeaway because we are always late with football and netball for the kids," Mrs Steger said. 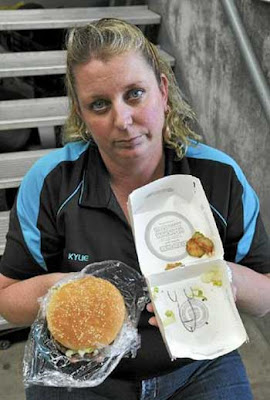 "It is like a little treat." Mrs Steger said the weekly dinner stop would now come to an end. "It literally made me sick," she said. "If they have drawn that in there, what else have they done to my burger?"

She said she was grateful the burger did not go to her children. "I'll never buy another burger from there again." She said the store had been notified of her complaint. A Hungry Jack's spokesman said the company was treating the complaint "very seriously" and had launched an internal investigation to determine the facts.
Posted by arbroath at 6:03 am
Email ThisBlogThis!Share to TwitterShare to Facebook

Judging by the looks of her, she needs more of that in her life.

Worried her kids would see it but feeds them poison once a week...go figure.Lazy biach.

It literally made her sick? Does she know the meaning of the word literally? Was she really sick?