A man spotted an incredible sight in a Freshwater backyard. As a frequent visitor to the beaches and wild rainforests of Cape York, kite surfer Ant Hadleigh thought he had seen it all. But the Cairns man was in disbelief after witnessing a golden orb spider slowly attempt to eat a brown tree snake at a mate's place in Freshwater. 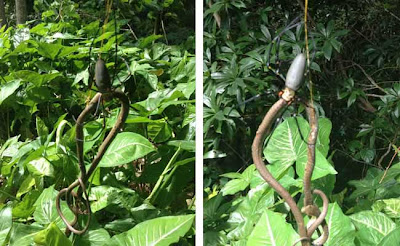 "I thought it was pretty incredible," Mr Hadleigh said. "A few times the snake managed to get up and attack the spider, and the spider would run back up the web. I would have put my money on the snake for sure, especially seeing how big it was."

Mr Hadleigh estimated the tree snake to be around half a metre long and was alive for "an hour or more" after being caught in the spider's web, before finally succumbing to the arachnid's venom. "You could see the spider just chewing into it and the part which the spider was eating had gone all black and the insides were bubbling," he said. "It was pretty crazy."

Mr Hadleigh said the same spider devoured a wasp the day before, after an aggressive sparring match between both creatures. "The wasp kept trying to sting it, and it (the spider) used its feet to push the stinger away every time," he explained.
Posted by arbroath at 6:04 am
Email ThisBlogThis!Share to TwitterShare to Facebook

Geez. I remember a Far Side comic in which two spiders had strung a web across the bottom of a child's slide, with one saying, "If we pull this off ..."