A quarter of a million Samsonite suitcases are being recalled amid concerns chemicals in their handles could cause cancer. The suitcases, some of which can be bought by British customers online, are thought to contain traces of a chemical compound linked to causing cancer and birth defects in animals.

The company are recalling 250,000 of the Toyko Chic suitcases following tests by the Consumer Council in Hong Kong. The council found 17,960 milligrams of polycyclic aromatic hydrocarbons per kilo; higher than voluntary guidelines recommend. Samsonite is now understood to be spending around £320,000 to recall the suitcases, which have been sold over the last three years. 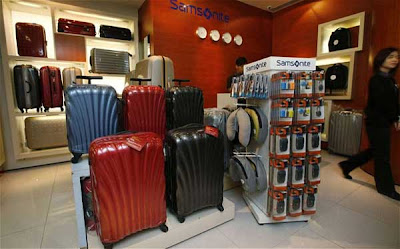 They have played down the findings, conducting their own tests which came out “significantly lower” than the Hong Kong Consumer Council findings, with just 17mg per kilo. Ramesh Tainwala, Samsonite’s Asia-Pacific and Middle East president, is reported to have said: “A human being has to eat 100 handles and then you have the probability of one in a billion chance of getting cancer.”

The Tokyo Chic suitcases are predominantly sold in Asia but have been advertised to British customers on specialist luggage websites. The suitcases, which are understood to be dispatched from a warehouse in Belgium, will now have their side handles replaced. Samsonite has already removed the line from Hong Kong stores while the replacements are carried out.
Posted by arbroath at 6:02 am
Email ThisBlogThis!Share to TwitterShare to Facebook

@Anonymous
So you don't see how we get subjected to substances from multiple sources would be bad?
Go lick a piece a lead ignoramous