An Irish publican has said he is no longer willing to take Irish backpackers at his Queensland hostel due to a spate of drunken and disorderly behaviour in recent years. Dublin-born Thomas Dunne claims several incidents have caused chaos for longstanding members of the Irish community in the locality. He said he has had to continuously deal with property damage caused specifically by the Irish contingent of guests at his hostel, Main Street Backpackers. Mr Dunne, his wife Audrey, and their three children, have been running their bar O’Duinns and adjoining backpackers hostel since 2006.

The backpacker accommodation is primarily used from May to November. During this time backpackers’ work locally on farms for up to 20 weeks to gain a second working holiday visa. He said he has had no issues at his bar, O’Duinn’s, but has had to force several Irish guests to leave the adjoining hostel due to their behaviour. Over the last three years the Irish backpacker has taken over the mantle [in behaviour] so we take less each year,” he said. 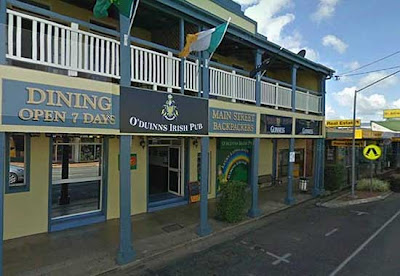 “The Irish are the only ones to have caused deliberate damage. Out of the 150-plus backpackers we had last year, only nine were Irish and only four stayed for the season. This year we have had eight Irish backpackers. It’s only the start of the season and already six have been thrown out, one checked out and one girl remains, who may I add, is no trouble. Two of the Irish lads who were kicked out at 2am, we had them arrested and charged for damage done to our accommodation,” he said. The two two Irishmen will face Proserpine magistrates court on Monday, on property damage charges.

Mr Dunne claims he and other Irish dwellers are now facing a backlash as a result of this unruly behaviour from Irish backpackers. “It’s the last straw we will not be taking any more. What can I say, we can’t tar everyone with the same brush, but yes we have had enough of the Irish backpackers who stay at our accommodation. It’s sad really because the other nationalities say the same about them at the other hostels. It reflects badly on us as we have to live up here,” he concluded.
Posted by arbroath at 6:03 am
Email ThisBlogThis!Share to TwitterShare to Facebook

Whilst I've little doubt what he's saying is true, he'll end up being done under some equal-opportunities legislation. It'd be like saying "Everyone welcome (except blacks or Hindus)" Probably best to get friendly with the police and pre-warn them that there are dickheads booked in.

The problem is that the backpackers stay for an extended period of time, this is the north-eastern part of Australia so we are talking months in many cases here.

I will stand up for his right to judge that people are likely to cause trouble simply based on their nationality, on one condition: That his entire nation will accept that his view of the Irish almost exactly coincides with the rest of the planet's view of Australians. And that the rest of the world has the right to ban Australians from entering their premises and even their country. In fact lets go further and just ban the whining gits from ever leaving Australia in the first place.