Mayoress who dressed as Lincolnshire sausage mistaken for giant penis

A mayoress has been criticised by her constituents after she dressed up as a sausage to welcome the Olympic torch. Jill Makinson-Sanders, 61, wore the novelty costume to support the campaign to win protected status for the Lincolnshire banger when the Olympic flame went to Louth, Lincs., on Wednesday. Instead of wearing her traditional mayoral chain and robes to greet the torch at 7am, the councillor dressed up in an 8ft-tall pink sausage costume. 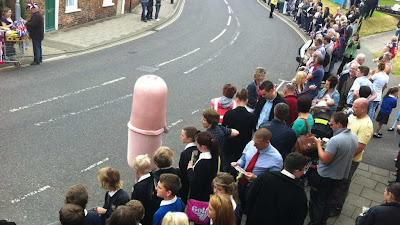 Mother-of-two Sandra Ellington, 38, said: "She probably thought she was being quite fun and quirky - but it backfired a little bit. People couldn't take their eyes off her because it looks so rude - her outfit certainly gained a few titters among the crowd. It's something you'd expect to see on a stag-do - not being worn by a respectable mayor.

"She didn't carry the torch but when you saw her running down the street by the torch relay team nearby it really looked like she was wearing something obscene." Resident Bill Nicholson added: "The council chamber must put a stop to this embarrassment, and restore some dignity to the people of Louth who do not want the local Olympic event high-jacked for commercial reasons. To insult the whole spirit of the Olympic movement and the modest people who have carried the torch is not in Louth's interest." 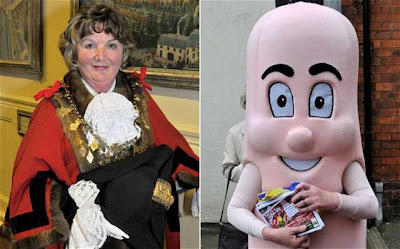 But Cllr Makinson-Sanders defended her choice of costume. She said: "Louth Town Council has not been officially invited to have anything to do with the Olympic torch or to meet the torch and welcome it in to the town. I was not attending therefore in my capacity as mayor. I serve the town as mayor but only when invited to do so. I was not wearing a chain at this event."
Posted by arbroath at 6:00 am
Email ThisBlogThis!Share to TwitterShare to Facebook