The family of a critically-ill transplant patient hoped their son might say he loved them when he emerged from an eight-day coma but instead demanded a KFC burger meal. Brave Sam Boughen (corr), 26, suffers a rare genetic liver disease and was on the edge of death having undergone two life-saving transplants. Sam, a keen drummer, spent eight days in a coma after he contracted e. coli and a deadly lung disease as he battled to survive on life support. But his family - who had maintained a 24 hour bedside vigil - were stunned when Sam opened his eyes and used an iPad to type out and ask for a KFC burger with gravy. Sam's dad Martin, 53, said: "We had an app that meant he could write what he wanted to say. We all held our breath the first time he started writing. We thought he would tell us that he loved us - but instead he asked for a KFC. Then we knew we had Sam back." 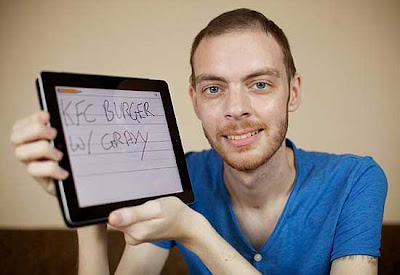 Dad Martin gave Sam, from Glastonbury, in Somerset, 60 per cent of his own liver in January this year after the young dad was diagnosed with the genetic disease. But two days after he was discharged from hospital, Sam, who lives with fiance Saffron and daughter Lottie, began to feel unwell. He was taken to Yeovil District Hospital and then transferred to Derriford Hospital in Plymouth - where much of his post-surgery care had been carried out. But when his symptoms worsened, he was rushed back to Kings College Hospital in London. Martin said: "We were told they thought there had been a clot. It turned out that an artery had been blocked and at that point we knew it was serious." The blocked artery meant that Sam's new liver was not getting enough blood. Shortly afterwards, the family's worse fears were confirmed - Sam's new liver had failed.

Sam said: "Within hours, I was classed as critically ill. Twenty-four hours after that, I was on life support." The musician went back onto the transplant list and his family were told to prepare themselves for the worst. But in early hours of April 15, a new liver was found from a donor. His exhausted body endured a nine-hour operation. While he was recovering doctors also discovered Sam had an e. coli infection - as well as a life-threatening lung infection. Medics were forced to play a balancing game with his medication as the drugs that could treat the lung infection put his new liver at risk. His family were again told to expect the worst and Sam remained in a coma for eight days until he stabilised. When came round he spent three weeks in a psychotic state before he managed to bring himself back to reality - by focusing on his 19-month-old daughter Lottie. 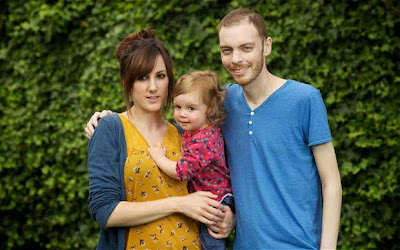 He said: "It was my daughter, Lottie. I just needed to get back for her." By the time Sam was mentally back to himself, muscle deterioration meant he was unable to move. A tracheotomy left the fried chicken fan unable to speak and he used his iPhone and an iPad to communicate with his family - who rarely left his side while he was in hospital. Sam said: "I don't eat many takeaways - but if I do it would be KFC. For some reason chicken must have been on my mind - because the first thing I asked for was a KFC chicken burger with gravy. Unfortunately I couldn't eat it because I was too ill." Sam is now back home - but still on medication for his lung infection and will require medication to keep his new liver functioning for the rest of his life.
Posted by arbroath at 6:01 am
Email ThisBlogThis!Share to TwitterShare to Facebook

A liver transplant usually fails when the right branch of the celiac axis (Proper hepatic artery) is not tied in correctly. Sonography is used to monitor this issue. It seems the surgeons failed to make the anastomosis work correct on the first try. I hope your net connections work out.

If he wanted KFC then he must have been really sick.