A devastating fire which gutted a crematorium in southern Austria was caused by an obese woman's excessive body fat blocking an air filter.

The fire occurred at the facility in the city of Graz in mid-April. Firefighters had trouble extinguishing the blaze due to a thick layer of insulation lining the crematorium's walls. 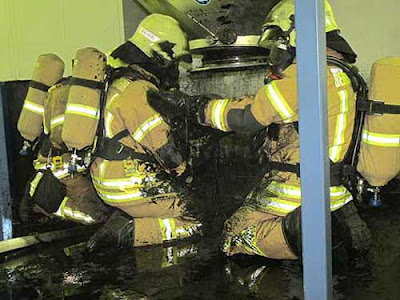 Former Graz city fire chief Otto Widetschek said special crematoria for obese people should be set up in Austria to deal with the potential dangers of cremating obese bodies. "In Switzerland, there is now a special crematorium for XXL-bodies," he said.
Posted by arbroath at 6:03 am
Email ThisBlogThis!Share to TwitterShare to Facebook

I once heard that large bodies are to be burnt first thing in the morning when the oven is still stone cold. That way the heat from the burning fat gets absorbed. I wonder if they have followed this protocol.