It's not uncommon to see porcupines up here, I mean, we have a lot of them here," said Brad Whitcomb. Whitcomb is the Regional Director at Allegany State Park in Cattaraugus County, and has always had a problem with porcupines chewing wood. "Buildings, our structures, in particular pine, the railings, the plywood panels on the bottom of screen doors," said Whitcomb.

Yet now the porcupines seem to have developed a new late-taste for climbing poles, and chewing on heavy-duty aluminum signs that are placed around the park. "And its not just a taste. They will in time, ingest the whole sign. They work on the edges, they hone them down, they're razor sharp and we don't find any filings beneath the sign to suggest they're just, just gnawing away at it," said Whitcomb. 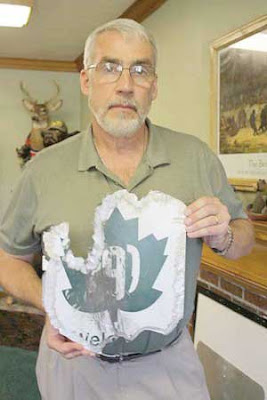 What gnaws at park officials is the mystery behind why the porcupines find the signs so tasty in the first place. "It is crazy, I really can't explain why they do it, but it's not unexpected, by far," said Darrin Bierfeldt, Park Forester. "There's no rhyme or reason to it me. They find em, they like em, the chew em and we replace them as we go," said Whitcomb.

To help curb the problem, not to mention the appetite of the porcupines, park officials continue to look for answers, and are now replacing chewed metal signs, with what they hope are less appetizing new plastic ones. "To see if that makes a difference, they really haven't been out there that long to tell if its been working so far, it seems to help a little," said Bierfeldt. Park officials add they're unable to put a dollar figure on just how much damage the porcupines have caused so far.