In a scene reminiscent of a Hollywood movie, a gang of thieves are caught attempting to break into a moving truck on a motorway in Romania. Police from Romania's Department for Organised Crime and Terrorism (DIICOT) filmed the gang as they attempted to rob a lorry while it was speeding along a motorway at night. 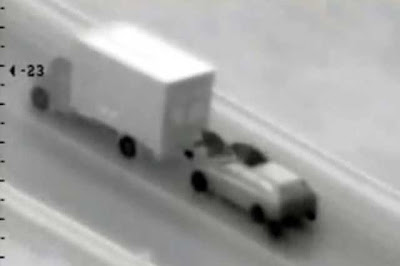 Positioning their car just inches behind the moving truck, two gang members climb out of the sunroof. One manoeuvres himself onto the bonnet as the other holds onto his legs. The thief on the bonnet then proceeds to break into the truck's rear door using specialist tools, which the police later recovered.

However, having opened the door the gang appear to decide against taking the lorry's contents, climbing back into their own car and retreating. According to DIICOT the gang were involved in many successful robberies from moving vehicles between March and May of this year.

The operation to capture them involved 20 house searches in the Romanian counties of Ilov, Alba and Hunedora as well as in the capital city, Bucharest. Police claim the gang stole televisions, cigarettes and coffee from the trucks which they later sold on in the Obor market in Bucharest.
Posted by arbroath at 6:05 am
Email ThisBlogThis!Share to TwitterShare to Facebook