A show at a private girls' high school in Sherbooke, Quebec, Canada, went strangely awry when a young hypnotist left several students in "mass hypnosis" limbo and he had to call in his mentor to snap them out of it. One student at Collège du Sacré-Coeur was reportedly left hypnotized for five hours until Maxime Nadeau, the young hypnotist, called his mentor to the school for an emergency intervention.

It all happened at an end-of-school year event last week, when Nadeau was hired to stage a hypnotism show for a small group of 12- and 13-year-old girls. He worked on a small group while others watched the show. When it came time to end the event, several girls in the audience remained mesmerized and couldn't snap out of it, no matter what Nadeau did. Nadeau didn't panic, because "it wasn't dangerous," he said. 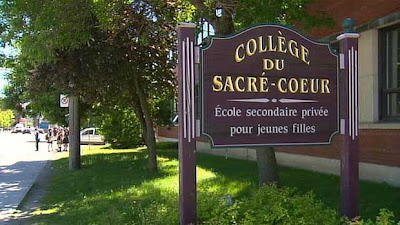 "Being in a trance is a state of well-being," Nadeau explained. "I wasn't stressed. I knew they would get out of it." He called his mentor and trainer, Richard Whitbread, who made the hour-long trek to the school from his home in the town of Danville. Whitbread found several girls were still suffering the effects of "mass hypnosis."

"There were a couple of students who had their heads lying on the table and there were [others] who, you could tell, were in trance," he said. "The eyes were open and there was nobody home." Whitbread said he went through the process of making the girls think they were being re-hypnotized and then brought them out using a stern voice. Whitbread said because his protégé is a young, attractive man, the girls could have been particularly influenced because they were keen to follow his directions.

With video and audio.
Posted by arbroath at 6:06 am
Email ThisBlogThis!Share to TwitterShare to Facebook