'Crocodile' terrorising German town turns out to be a beaver - Update

Police in Bavaria ended a week-long crocodile hunt empty-handed on Monday after experts concluded that their prey was probably a harmless beaver after all. A witness prompted a frantic search in and out of the water. Fearing dangers lurking in the depths of the Middle Klausen Lake near Regensburg, police hunted solidly for a week, even sending divers to scout around for signs of exotic reptilian life and a helicopter to check the lake from above.

In reality, the “long-tailed, big-clawed” animal reported by two witnesses was more likely to be a large beaver, the police said on Monday. Hope dwindled when not one of the 3,700 photos taken by camera traps was a mugshot of a “Klausi” the crocodile, as it became to be known. The hunt was called off and the swimming ban lifted after the the only wildlife captured by the four cameras was “foxes, grey herons, dogs and snapped branches, but no crocodile,” said Schwandorf spokesman Lothar Mulzer. 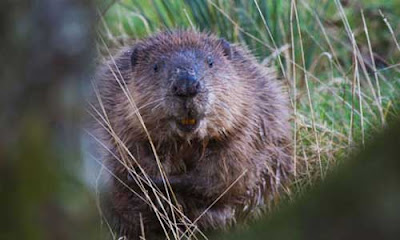 The town's mayor, a town council official and a fireman were recruited to inspect each of the photos. Around 50 police officers, fire fighters, water authority officials and technical volunteers were involved in the operation, which began on Monday morning after a 68-year-old man saw the animal in the reeds while walking his dog on Saturday evening. Officers reasoned that they could imagine someone keeping a crocodile as a pet but setting it free because it had got too big to keep at home.

“Our animal-lovers have everything you can imagine at home, such as highly poisonous snakes. Why not a crocodile?” a spokesman for Regensburg police said last week. “Now peace can return and everyone can go back in the lake,” said Mulzer, keen to sink lingering concern that swimmers might still risk coming face to face with Klausi. If a swimmer were to be attacked by a metre-long croc though, the bite would only be like that of a dachshund, said the town's fire marshal.

Previously.
Posted by arbroath at 6:02 am
Email ThisBlogThis!Share to TwitterShare to Facebook