Jail for man who collected rainwater on his own property

A rural Oregon man was sentenced on Wednesday to 30 days in jail and over $1,500 in fines because he had three reservoirs on his property to collect and use rainwater.

Gary Harrington of Eagle Point, Ore., says he plans to appeal his conviction in Jackson County (Ore.) Circuit Court on nine misdemeanor charges under a 1925 law for having what state water managers called “three illegal reservoirs” on his property – and for filling the reservoirs with rainwater and snow runoff. 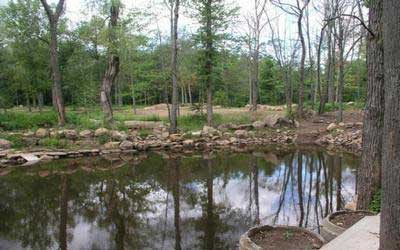 “The government is bullying,” Harrington said in an interview. “They’ve just gotten to be big bullies and if you just lay over and die and give up, that just makes them bigger bullies.

“So, we as Americans, we need to stand on our constitutional rights, on our rights as citizens and hang tough. This is a good country, we’ll prevail,” he said. The court has given Harrington two weeks to report to the Jackson County Jail to begin serving his sentence.

Full story and audio interview with Mr Harrington here.
Posted by arbroath at 6:04 am
Email ThisBlogThis!Share to TwitterShare to Facebook

I'm afraid there's a bit more to this story than "collecting rainwater." He was damming rivers.

Further: "Harrington represented himself at his Jackson County Circuit Court trial this month."

You know what they say about a man who represents himself in court: He's a Tea Partier.

Story at the Oregonian: http://www.oregonlive.com/environment/index.ssf/2012/07/jackson_county_man_sentenced_f.html

So he's a tea partier. So what?

For me this get me thinking about corporations buying sources of water. Quite alot of pros and cons when you start reading about it
And there have to be cases between countries regarding damming/diverting water.

Or using USA as an example.
People ussualy agree upon Minnesota being the source of the river, but how would you reglate compensation for the water from the Missouri.
And if you would get more money from the southern parts of the river can you limit the usage of those up north?
Can anyone here claim (when disregarding the complete PR fail) that a company will not take the chance to say.. limit the amount of water for the northeners?