A hapless child in Dharwad, India, has become a victim of pig bite. Four-year-old Jagan Anigol suffered injuries on Friday morning when a pig attacked him and bit his genitals when he was responding to nature's call.

The boy was initially taken to the district civil hospital where doctors after providing first aid sent him to KIMS hospital in Hubli. Jagan was attending a call of nature in front of his house in Medar galli of Haveripet in ward no. 6 of Dharwad when he was attacked by the pig. It is common to see children urinating by the roadside in the absence of adequate toilet facilities in the old Dharwad area. 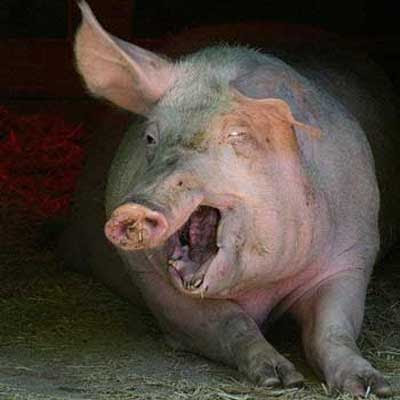 The incident occurred at around 7.30pm. When the boy raised an alarm his parents took him to the hospital. Kapil Shirahatti, Jagan's relative alleged that the doctors at KIMS attended to the boy two hours after reaching the hospital. They have operated on him and the boy is said to be out of danger.

The menace of pigs and stray dogs has been haunting the citizens of Hubli and Dharwad for several years now. Last week a six-year-old boy in Hubli was injured in a pig attack. Decisions about eliminating pigs by shooting them are being discussed. The pig owners have been told to move pigs off the city limits, but there is currently no effective enforcement of this directive.
Posted by arbroath at 6:05 am
Email ThisBlogThis!Share to TwitterShare to Facebook