Two elephants, a calf and its mother that fell into an abandoned elephant trap at Vallakadavu in Kuttampuzha Forest range in India were rescued on Thursday. The trap was used by the Forest Department in the 1960s to catch wild elephants for domestication. 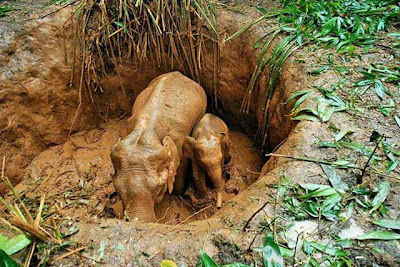 The animals fell into a 15ft deep well, which was covered with bamboo leaves, in the early hours. By evening, the animals were rescued after a pathway was created from the trap by levelling its banks. The mother and the calf later walked into the forest area.

As the area was inaccessible the rescue team had to face difficulties. The area could be reached only by crossing the river in bamboo rafts. This prevented the possibility of using mechanical devices or trained elephants for the rescue operation. Forest officials led by Divisional Forest Officer P. Nagaraj led the rescue operation.

V. K. Venkitachalam, secretary of the Heritage Animal Task Force, an NGO specialising in the protection of elephants, demanded that abandoned traps should be levelled as it posed serious threat to wildlife. Protective structures should also be constructed for wells in forest settlements. He also demanded action against those who failed to cover open traps in the Kothamangalam forest area.
Posted by arbroath at 6:06 am
Email ThisBlogThis!Share to TwitterShare to Facebook