A man who found a kitten encased in concrete at his home fears it was sent as a threat from a polygamist Mormon sect. The tiny cat was discovered alive but audibly in pain, inside a tube in the back yard of Isaac Wyler, a former member of the Fundamentalist Church of Jesus Christ of Latter Day Saints. Andrew Chatwin, who has also abandoned the FLDS, claimed it was intended as a warning to Mr Wyler to stop speaking out against the church. 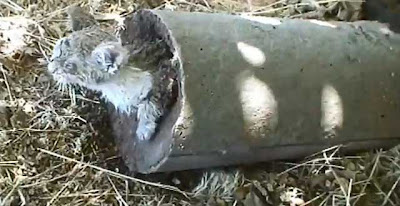 The FLDS achieved notoriety when its leader Warren Jeffs was sentenced to life in prison last year for sexually assaulting two underage girls he had 'married'. Mr Chatwin, who left the church in 1999 and has since criticised its polygamist beliefs, told said that FLDS members frequently left dead animals on Mr Wyler's property. In the latest case, six weeks ago, a cat was found buried up to its neck in concrete in a metal tube being used to construct a shade for horses in Mr Wyler's yard in Colorado City, Arizona.

It was mewling incessantly and appeared to be struggling to escape in a video filmed by Mr Chatwin and a friend. They took down the pipe and cut off the metal, leaving just a lump of concrete with the kitten's head sticking out. They then took a hammer to the concrete and hacked it off, but had to leave lumps still sticking to the fur of the terrified animal.

Mr Chatwin handed the cat over to a local rescue charity, but sadly it died a few days later. When he reported the apparent abuse to a Colorado City sheriff who is allegedly a member of the FLDS, he received little help. 'He kind of chuckled and laughed a little bit and then he said that if it was up to him, he'd just throw dirt on it,' Mr Chatwin said.
Posted by arbroath at 6:07 am
Email ThisBlogThis!Share to TwitterShare to Facebook

Yeah, because burying one of God's creatures alive in concrete and sending it as a threat are the actions of a good kind Christian. My heart goes out to the poor little thing, and I hope those responsible (and the corrupt Sheriff) are jailed for their actions.

'Church' my ass. More like 'commune of violent rapists'.

The scary part is that the Republican wannabe president is a mormon.

The more I read about Mormon beliefs, the more they make Scientology sound reasonable.

"The scary part is that the Republican wannabe president is a mormon."

You keep falling back on that, cupcake. Because attacking someone's religion ALWAYS works out well in politics.

Perhaps it's a sign given that their arch-angel is called MORONi.

Comparing FLDS and LDS mormons are like comparing france to germany cause they're both european. LDS actively distances themselves from and condemns/excommunicates the fundamentalists (the ones with child brides and communes). No i'm not a mormon just someone who hates to see ignorance on the internet. [One post down 47 billion to go]

I think people are idiots and can be cruel and will use anything as an excuse to keep a status quo.
I'm not a mormon and could confidently say its got very little to do with mormonism
more to do with Ccults

I guess I'll just think of Romney being such an animal lover that he puts his dog in a cage, straps him on the hood of his car and drives around like that then. Nothing to do with religion on that one, just that he also abuses animals.

Re: Anon3 - Mormons do consider themselves Christians. http://mormon.org/faq

Yeah, just film away while that kitten is obviously in pain. You're just as bad as the person who put him there.