Runaway crocodile on the loose in German lake

A small crocodile is on the loose in a Bavarian lake popular with bathers and has so far eluded a team of 12 police divers. The aquatic reptiles aren't indigenous to any part of the European continent, but that hasn't stopped an apparent stray creature from adding a bit of summer suspense at the lake.

There have been two sightings already this month, including a dramatic encounter with a 44-year-old woman who was swimming in the Klausensee lake on July 1 and collided with the reptile, sustaining a 7 centimetre (2.75 inch) scratch in the process. "The woman said she was swimming to retrieve her air mattress, which had drifted off along the shore when she was suddenly covered in earth and an animal swam over her, it had a long tail and was about a metre (three feet) long," police in the town of Schwandorf said in a statement. 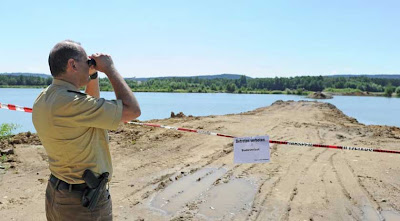 "She fled out of the water calling for help and described what had happened to her son who had come rushing towards her. But he could only see bubbles in the water." Police have been scouring the large lake with binoculars and have banned people from swimming or approaching its shore, but so far the Schwandorf community hasn't descended into a Jaws-style panic.

"I don't think it's a life-threatening crocodile, it's only a metre long and the tail will take up a lot of that, so it's snout is unlikely to be huge," police spokesman Michael Rebele said. "An aggressive dog would pose a bigger threat. This animal doesn't appear very aggressive. The claws and teeth could cause injuries though." The crocodile was last reportedly sighted at around 8 p.m. last Saturday by a man walking along the shore.
Posted by arbroath at 6:06 am
Email ThisBlogThis!Share to TwitterShare to Facebook