A very rare melanistic or black tiger has been photographed in the core area of the Similipal National Park in Odisha. "We have physical evidence on existence of black tiger inside the core area of the tiger reserve in the Similipal National Park," Forest and Environment minister Debi Prasad Mishra has said. Stating that the picture of the rare species was captured on camera, Mishra said, "We have not heard of the existence of the black tiger anywhere in the country." 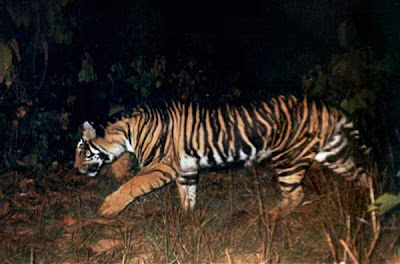 He was speaking after the first governing body meeting of Similipal Tiger Conservation Foundation. Explaining the difference between an ordinary tiger and a black one, Regional Chief Conservator of Forest, Similipal, Anup Nayak said "The melanistic tiger also belongs to the Royal Bengal Tiger species and same in size as yellow ones. The difference between the black and common type of tigers is that the former has wide black patches, while the black colour is prominent in the melanistic tiger," he said.

While there was a difference of opinion between the state government and the Centre over the population of tigers at Similipal, Mishra said, "We have installed 68 cameras in the core area where density of tigers is more. A total of 200 cameras will be fixed in the tiger reserve area to count the exact number of tigers at the onset of winter," he said.

The state government in consultation with National Tiger Conservation Authority, Ministry of Environment and Forest has also decided to raise a Similipal Tiger Protection Force, the minister said. The force would comprise an assistant conservator of forest, three forest rangers, 19 foresters and 90 special tiger forest guards, he said. Out of the 90 special tiger forest guards, 63 would be regularly recruited and 27 from among local forest dwellers.
Posted by arbroath at 6:05 am
Email ThisBlogThis!Share to TwitterShare to Facebook