Two inmates tried to escape from a Brazilian prison by disguising themselves as bags of rubbish to be put out by prison guards. Sidney da Cruz, 24, and Carlos Pereira, 18, hoped to be picked up and thrown outside by staff at the Delegacia de Furtos jail in Curitiba, southern Brazil.

But a prison guard foiled the plot after noticing that the plastic bags were 'shaking'. The prisoners' bid for freedom began on Tuesday after lunch, when leftover food and plastic plates are collected in rubbish sacks. The two men, jailed for car theft, climbed into the plastic sacks and put themselves next to the other bags lined up in a corridor for collection. 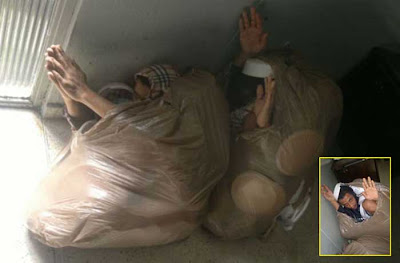 Prison guard Cleverson Mineiro said: 'I was walking past the sacks of rubbish and I noticed something moving. At first I thought there was a rat, but on closer inspection I could see it was two inmates disguised as bags.' Police chief Gerson Alves Machado said: 'I don't know how they expected someone to pick them up and carry them away.

These are grown men and the bags are made of thin plastic.' The men were arrested and may have their sentences extended, he added. Authorities have now launched an inquiry into how the prisoners managed to get inside the sacks, which had been tied.
Posted by arbroath at 6:06 am
Email ThisBlogThis!Share to TwitterShare to Facebook