Man has late night brush with baby fox on the Tube

They’ve invaded London’s gardens and even homes - now it seems that urban foxes are taking over the Tube.

Gadget and gaming journalist Stephen Ebert was travelling on the underground late on Sunday night when a fox suddenly came onto the train near Edgware Road Tube station. 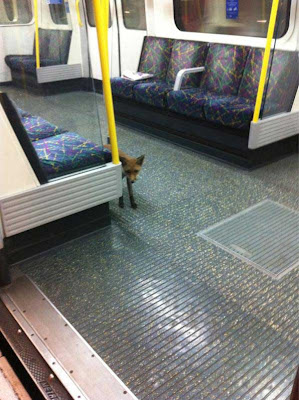 A spokesman for Transport for London said: “We have seen the picture but we haven’t received any direct complaints or reports of the fox.

“It’s very rare for foxes to get onto to trains like this, although it does occasionally happen on the further outreaches of the tube in places like Amersham or Epping.”
Posted by arbroath at 6:00 am
Email ThisBlogThis!Share to TwitterShare to Facebook