A Swansea resident was left shaken after discovering a royal python in his kitchen drawer, says the RSPCA.

The non-venomous snake was discovered in a flat in the city's maritime quarter last Tuesday. It is thought the snake belonged to the previous occupants who have returned to Saudi Arabia. 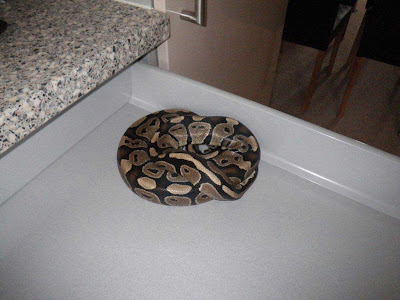 Royal pythons are also known as ball pythons as they curl into a tight ball when they are frightened. The snake is now in the care of the RSPCA.

RSPCA inspector Neill Manley said: "The snake is in great shape although the new occupant must have been pretty shaken by the ordeal." The RSPCA said royal pythons do not strike out to protect themselves.
Posted by arbroath at 6:01 am
Email ThisBlogThis!Share to TwitterShare to Facebook