Man urinated on woman at bar after she rejected his advances

Boulder police arrested a Longmont man who witnesses said urinated on a woman at a local bar after she rejected his advances Saturday on night. The woman told police she was standing next to the bar at Shooters Grill and Bar at about 11:45 p.m. when a man,later identified as Timothy Paez, 22, came up behind her and put his arm around her.

The woman turned around and said, "Um, really?," and Paez took his arm off her. According to police, a few seconds later, the woman said she felt some sort of liquid hitting her leg. She initially thought Paez was spilling his beer on her, but when she turned around she told police she saw Paez with his penis exposed urinating on her leg and the front of the bar. 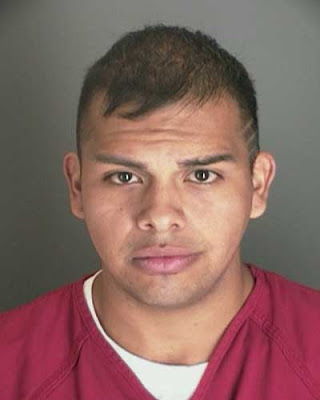 At one point he thought he had urinated on another male, but then retracted that statement. Paez was arrested on suspicion of public indecency and harassment and taken into custody. He remains at the Boulder County Jail. His bond has not been set, and a court hearing has not yet been scheduled.
Posted by arbroath at 6:05 am
Email ThisBlogThis!Share to TwitterShare to Facebook

If only she realized that peeing is a sexual come on that gets some of us wet. Literally….