As sharks circled all around, rescuers pulled a fisherman from the waters off the coast of Western Australia. The man was one of two who were plucked from the ocean after being spotted by a television helicopter in a dramatic rescue involving five aircraft and five boats. It came after three men failed to return after setting out in a fishing boat from Leeman, 170 miles (270km) north of Perth, on Thursday, prompting a search that covered 125 square miles (320s/km) of ocean. 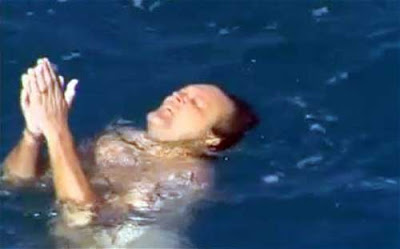 One of the men later died after being taken ashore, while the other man was being treated for unspecified injuries, West Australian police said. The third man remains missing. "We haven't spoken to the survivor yet and until then we don't know what happened," a police spokesman said. A helicopter for Channel Seven television spotted one of the men first, with the reporter on board, Grant Taylor, dramatically relaying the action as it happened.

"When we first spotted him, one of the scariest things was there was a massive hammerhead shark not 20 metres away from him, just slowly circling around him," he said. "He's stark naked ... just struggling to swim and float on his back and try and keep his head out of the water," he added of the man. "He keeps waving at our chopper trying to get us to come down and help him but there's nothing we can actually do."

Mr Taylor said an inflatable rescue raft was dropped but it drifted away from the exhausted man. "He just keeps putting his hands together praying, but he doesn't realise there's a boat just right behind him as we speak right now. Come on mate, just turn around and have a look, you're saved. He's yelling 'help'." Mr Taylor said the man was finally picked up by a search and rescue vessel and survived the ordeal. A second man was later found but died after being rescued.
Posted by arbroath at 6:04 am
Email ThisBlogThis!Share to TwitterShare to Facebook