A tantrum over first-class pyjamas held up a Qantas flight to Melbourne. Two passengers spoiled their own pyjama party after refusing to take to the skies without XL-sized PJs for the 15-hour flight from Los Angeles. The couple, both Australians, complained to Qantas flight crew as the plane was preparing to taxi from the terminal. An offer of business class jim-jams did not placate the pair first-class sleepwear. They chose to leave the plane and the flight waited for 30 minutes while their baggage was offloaded.

The A380 - which can carry more than 400 passengers - eventually arrived in Melbourne on time yesterday morning. Business class passenger Angela Ceberano said the cabin erupted in laughter when the captain announced the reason for the delay. "He said: 'Just to inform you all, the reason we've had the delay is because two of our first class passengers refused to fly on this plane as there was no extra large pyjamas on board for them'," Ms Ceberano said. 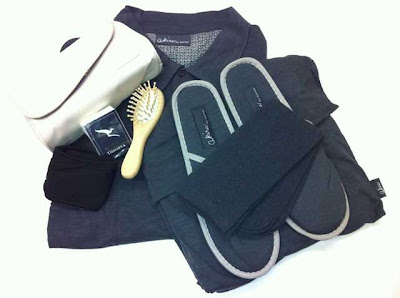 "The pyjama guy apparently told the crew: 'Make sure you tell everyone why we're so late: they didn't have pyjamas for us.'" Ms Ceberano said: "In his mind, he thought everyone sympathised with him. If you didn't laugh you would have cried. It was unbelievable." International business-class passengers receive Peter Morrissey pyjamas on "selected flights" while high flyers who can afford first class get "soft and luxurious pyjamas and slippers".

A first-class ticket from Los Angeles to Melbourne can cost upwards of $10,000, with Qantas spruiking the experience as a "private sanctuary in the sky". A Qantas spokesperson confirmed an incident had occurred in LA, but refused to give details. "Two passengers elected to get off an aircraft just prior to departure in LA overnight," the spokesperson said. "Other passengers were unaffected with the flight touching down in Melbourne this morning on schedule."
Posted by arbroath at 6:05 am
Email ThisBlogThis!Share to TwitterShare to Facebook

1) thank God these weren't Americans (for once) and
2) what does "spruiking" mean?

It's an Australian slang term meaning to promote an idea.

Hm, if I pay $10k for a ticket the company better have everything they advertise including that designer sleep-wear. Provided this was one of the "selected flights" ofc.

Whenever i travel Pakistan i use to book cheap flights for pakistan which can safe my expenses.