A burlesque dancer who was banned from collecting for the Poppy Appeal due to her saucy outfit has received an apology from the Royal British Legion. Despite raising hundreds of pounds for her local branch over the last two years, Josephine Freestone was asked to stop because of her 'inappropriate' costume. During the appeal, Mrs Freestone stands on the streets of Sherborne in Dorset, as 'Major Outrage', wearing a customised military uniform, fishnet tights and a corset.

But the 47-year-old mother-of-three was told last week by the local branch of the RBL that members had agreed she should be asked not to collect in the future. Since then Mrs Freestone she has been contacted by officials at the RBL headquarters who apologised to her. They explained that the Sherborne branch has no right to stop her collecting and encouraged her to carry on. 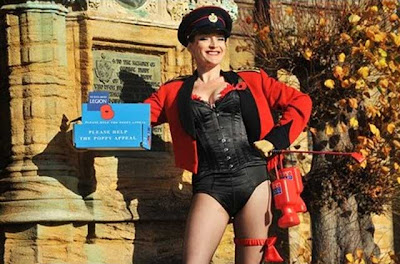 A spokesman for the RBL said: "The Royal British Legion is delighted to reassure Mrs Freestone that she is not banned from collecting for the Poppy Appeal. The decision of organisers in Sherborne has no validity and Mrs Freestone is absolutely welcome to collect for the welfare of our proud British Armed Forces wherever, whenever, and in whatever outfits she pleases.

"We apologise to Mrs Freestone for any upset that may have been caused and look forward to seeing her collecting on the streets of Sherborne come November." Mrs Freestone said: "I think it is delightful that someone saw fit to have the common courtesy to let me know that what the Sherborne branch said had no validity. I am overjoyed. I was devasted at the thought that I couldn't do it any more due to some small minded people, but I am really pleased to find out I can carry on."
Posted by arbroath at 6:02 am
Email ThisBlogThis!Share to TwitterShare to Facebook