Two hapless thieves were forced to flee empty handed after using a stolen digger to rip a cash machine from a bank only to find their getaway vehicle would not start. The pair had loaded the ATM onto the back of a pick-up truck but had to leave their spoils after the engine would not start. 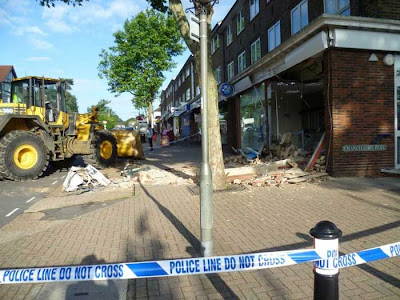 The men were last seen by witnesses running off into the night abandoning their truck and their loot. The attempted burglary happened at 3.10am on Monday at the branch of Barclays Bank on Keymer Road in Hassocks, Sussex. Homes in the area had to be evacuated during the night as the building was deemed unsafe.

A Sussex Police spokesman said: 'At 3.15am on Monday 6 August, police went to Barclays Bank in Keymer Road, Hassocks, after local residents had reported that an industrial digger vehicle had driven into the front of the bank, and dragged out the cashpoint machine installed in the wall. 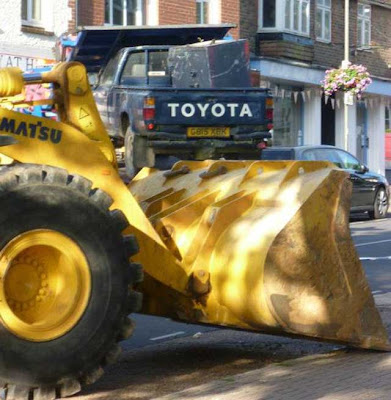 'The digger placed the machine on an adjacent stationary blue Toyota pick-up truck but the drivers of both vehicles, who are described as wearing dark clothing, then ran off in the direction of Chancellors Park leaving the unopened cash machine on the truck.' The digger used in the raid was stolen earlier in the night, police said.

There are more photos here.
Posted by arbroath at 6:01 am
Email ThisBlogThis!Share to TwitterShare to Facebook