A Spanish man returning home from prison found his wife mummified on her bed. A judge had denied Eduardo Ruiz entry to the home, in Ciempozuelos, near Madrid, but he knocked down the door last week after not hearing from his wife Angeles Fernandez for more than a year.

"When I came in, I thought there was a doll on the bed," Ruiz said. "And there she was on top of the bed like a mummy." He said one of his children had visited Ms Fernandez once in three years but authorities had ignored his requests that someone check on her. 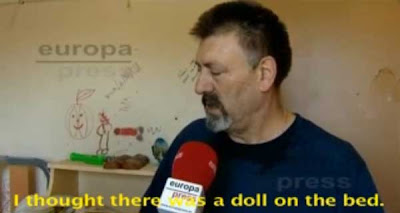 Neighbours noticed a bad smell coming from the home, but the judge reportedly denied authorities entry because odour complaints had been common since the woman moved into the building. "The lack of hygiene ... (of) Angeles Fernandez, on the last occasions that she was seen, were evident and so it was not ruled out that these smells were produced by lack of hygiene inside the home," authorities said.

The judge had reportedly said Ruiz could not visit his wife because he was in prison and did not have a relationship with her. Ruiz complained to police in 2011 that he had not heard from his wife for more than a year, but witnesses at the time had seen her at several local festivals. The woman's body showed no signs of violence, but an autopsy will be performed to determine the cause of her death.

With short video in Spanish.
Posted by arbroath at 6:04 am
Email ThisBlogThis!Share to TwitterShare to Facebook

What a weird judge. He denied the police access to the house even though the neighbours were complaining of a smell and had not seen the resident for some time?

Hopefully the local equivalent of a coroner's enquiry will be held and some serious questions will be asked of that judge.

The fact that only one of her children had visited (once) in 3 years raises concerns that the poor woman had other issues.
Shame on her neighbours for not noticing more & at least knocking or even peering through windows to check on her well-being.
And damn this PC society that stops ordinary people from daring to care.