A fire that displaced more than two dozen people from their Holland Township, Michigan, apartments was started by a resident burning off a squirrel's fur, according to the local fire chief. 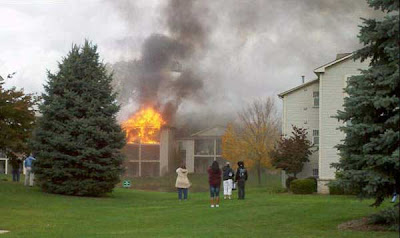 The fire at one of the buildings in the ClearView Apartments heavily damaged dozens of units and left many people displaced, but no one injured.

Fire Chief Jim Kohsel confirmed that the fire was started when a resident attempted to use a propane torch to remove a squirrel's fur before eating it. The resident was on the deck of a third-floor apartment. The fire got out of control and soon spread to the roof, which eventually caved in.

Both the sheriff's department and the Holland Charter Township fire department were on scene within minutes of the fire starting. They called on Zeeland's fire department to assist. Eight apartments were destroyed and several others sustained smoke and water damage.
Posted by arbroath at 6:05 am
Email ThisBlogThis!Share to TwitterShare to Facebook

What's a word for "beyond stupid"?

How 'bout Super Dumbass...will that work?