Cheetahs need to run. As the world's fastest animals, the big cats can run up to 65 mph and need to get up to speed to burn off metabolic compounds. But the two who live at the Houston Zoo don't have much opportunity to do that. "They need about 600 feet," said Beth Schaefer, the zoo's curator of primates and carnivores. "We don't have that straightaway anywhere on zoo grounds." 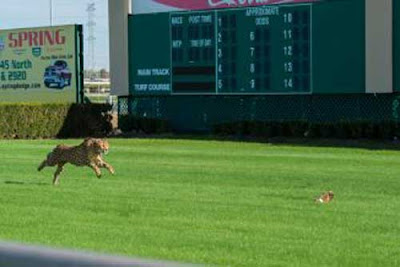 So, where can Kito and Kiburi, a pair of 5-year-old cheetah brothers go to burn off energy? It turns out that a great place is the turf track at Sam Houston Race Park at Houston Parkway, West. The park is fenced, and cheetahs eventually do get tired, Schaefer said. "We knew if things went completely as wrong as they could be, we were going to be able to get these cheetahs back on leash," she said. As it turned out, things went great.

Starting in mid-August, zoo staffers took the big cats to the park twice for a stroll on-leash to see how they would react. "They were so calm it was amazing," Schaefer said. "It was like they had been there every day of their lives. We think because it's so wide open. Cheetahs on the plains are comfortable with wide-open spaces." They also trust their trainers, who have worked with them since they were infants, she said.

In early November, an entourage of 10 people took Kito and Kiburi to the park off-leash, along with the Anatolian shepherd dog, Taji, who has grown up with them. Their second trip off-leash was Dec. 11, but it will be the last for a while because the horses return next week. "We're in a holding pattern until horse-racing season is over," Schaefer said.
Posted by arbroath at 6:07 am
Email ThisBlogThis!Share to TwitterShare to Facebook

I'd sooner go to the cheetah races than horse-races. Maybe they could combine it.. let the horses go first and have them pursued by the cats, first rider to fall off loses. Who wouldn't pay money to see that?

Because some people recognize horse racing as the Indian Horse Racing option available despite racing’s failure to market it that way. With an educated cheering, these fans get involved in the game. The races are more thrilling.